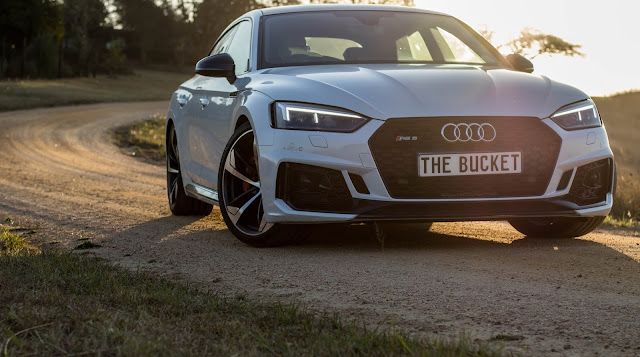 It's always difficult when you get a test car from a new manufacturer for the first time, you want to make a good impression so they continue giving you their cars and you always extra careful with the car, making sure you don't anything stupid with it. Then comes the part about being honest about the cars, I mean if the car doesn't meet your expectations, you have to be honest with your readers, but at the same time don't make the criticism too harsh to piss off the manufacturer, thankfully I haven't encounter that problem yet. A few weeks ago I was given my first Audi test car,  Audi's been one of SA's favourite brands over the past few decades, it's sister brand VW is extremely popular with the masses and it also proved to be a stepping stone for those who wanted more luxury and refinement in their drive. For my first Audi I was fortunate enough to get one of their powerhouse performance cars, the Audi RS5 Sportback. Now many who aren't too family with the Audi line up, the A5 is their Coupe variant of the mid range sedan the A4, the Sportback is a four door version of the coupe, like a Gran Coupe. 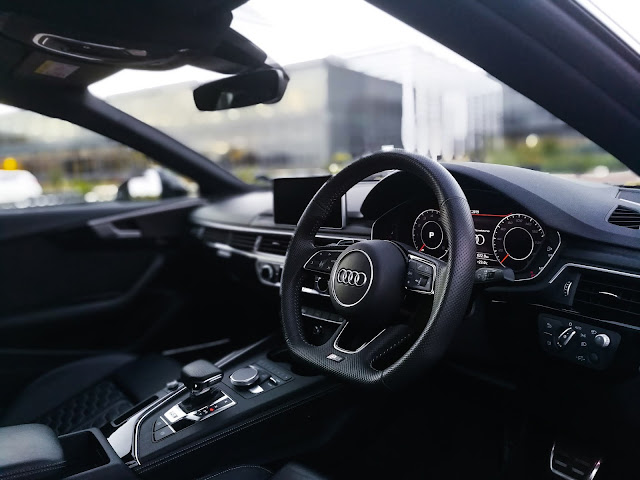 It's not often I'd say a design is faultless but with the RS5 Sportback it's pretty much, being the range topping performance model, you would expect it to look the part. So a nice wide body that sits low with extra flares and added bits to give it that sporty menacing look and Audi has given it all of that and a little bit more. Just looking at this car is doing your eyes a visual favour. While the elegance and charm of the A5 is essentially still there, the team at Audi Performance made sure you wouldn't confuse this one with a regular A5 Sportback, from any angle! They're tons of added elements that just make you think "that's clever" or "that works so well on this". Standing and viewing it from the front, with that lowered stance, and the word "quattro" embossed on the front splitter bottom, just echoes what this car is all about and also harks back to their heritage with the quattro models of the past. On the inside, the sportiness continues with racing seats with a honey comb pattern, RS5 stitched on the head rest, added brushed aluminium and chrome finishes. Overall faultless design for me, and the added extras like coloured calipers and elements added to the lights finished in high gloss black really make the car stand out more. 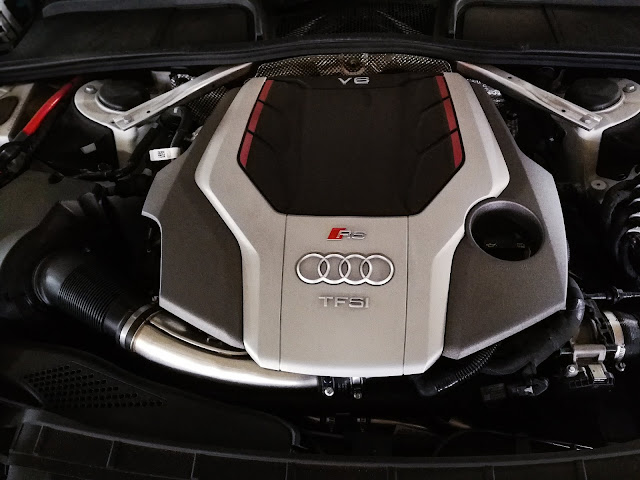 I've driven a lot of fast cars in my life, but nothing will prepare you for the utter insanity of the RS5 power plant. Push start and your ears are greeted by the raucous twin tail pipes echoing the start of the beast which is the 2.9L Twin Turbo V6 beneath the bonnet. Just giving it a few revs while in idle has the whole car tipping to the side, displaying the brute levels of torque that it makes. The previous generation RS5 utilized the 4.2L naturally aspirated V8, and there was a lot of negative comments about this turbo powered engine when it first was made known about, but after driving this car for a week, it's actually better that the V8. Hard to believe I know and bold words spoken by me but it produces 331kW, 450bhp, and 600Nm of torque, all very similar or more than the previous engine. Then comes the question about turbo lag, no idea what voodoo they're doing at Audi HQ but there is almost none with this car, instant power when pedal meets metal, 0-100kph in 4.2 seconds! That is ridiculous, with a top speed electronically limited to 280. When dynamic mode is engaged, the trust in which the RS5 generates, pushes you and your passengers into your seats, giving you an adrenaline overdrive. While the Audi RS5 Sportback does sit lower than more sedans, the ride comfort is still pretty great. Even with the large 20-inch rims there is hardly ever any road noise in the cabin. The seats, while styled in a racing trim are also quite luxurious and soft. The back seats are bucket styled so getting three people in there is possible but might be a bit uncomfortable to the person sitting in the middle. The RS5 Sportback comes with three zone climate control and the front two seats have seat warmers and came with the optional extra massage feature. It was the first time I had a test car with this feature and lord almighty I have been missing out! It has three types of massages for you to choose from and each has different levels or intensity. It really relaxed you as your drive and minimizes the road rage demons. 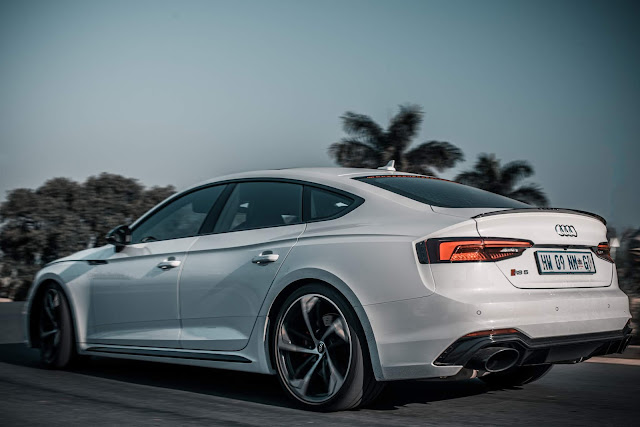 With cars of this nature, there's bound to be loads of tech and the RS5 did not disappoint, electric seats, with massage functionality were a big plus as I spoke off earlier. The digital cockpit, a genius stroke by Audi, one of the first to introduce this to their cars and it honestly displays everything you want to know. There was also a heads up display which project info on the windscreen which was very handy, what I liked about that was that the controls for it was an individual knob located on the the side of the dash so you could adjust to suit quite easily and not mess about in the infotainment system. Now with the infotainment system, you got a big screen in the center which for me, served very little purpose, granted there was connectivity for Apply Car Play and Android Auto but then to, it would just do the same thing and display what I was listening to but this didn't bother me too much as I know this is the outgoing system and interior from Audi and the next gen has already debuted in the Q7 and Q8. The car also came with side mirror warmers, my guess is to melt ice of them, something you wouldn't need in Durban, ever. The car came with the usual driving aids such as lane departure warning and blind-spot assist which I really liked as unlike other cars which have a tiny light on the actually mirror, the RS5 has big light on the inside of the mirror holding which is much bigger and brighter so it gets your attention right away. 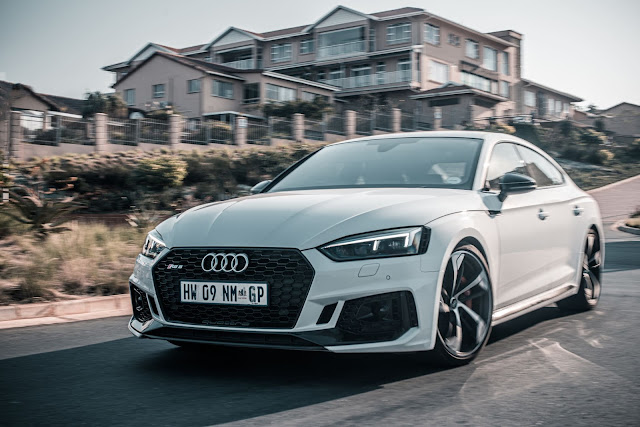 While I may have made it seem that all this car is good for is speed and power but the honest truth is that while that is the main draw card for it, it actually is very tame when you want it to be. A sort of Jekyll and Hyde persona, which I enjoy. It's a four door saloon which essentially is aimed at families so you can't be hurtling them from point A to point B. The car is a functional family car, with adequate luggage space, the loading compartment is made more easier to access with the large automatic tailgate. There's just something about cars like this which makes me smile from ear to ear, it car be practical and functional but also demented when you want it to be. The quattro technology lets you thrash it around bends at high speed, giving you the confidence to try it faster the next time, but not too fast, don't want to be breaking any laws of the road now. It's probably the best test car from Audi I could have possibly started with and while many ask if whatever follows would top this one, I'd like to think it would surprise in its own way. 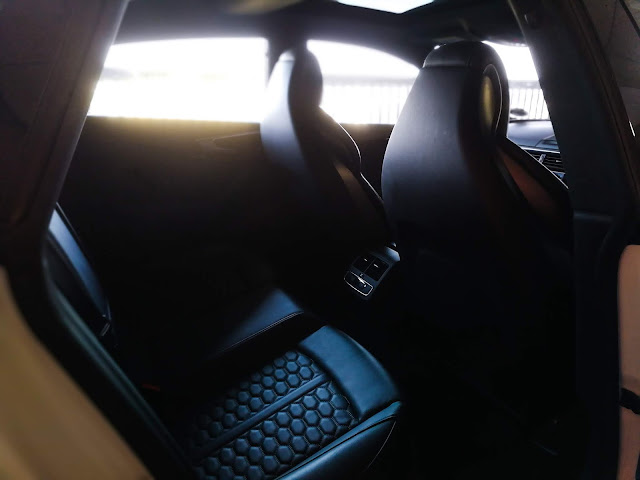