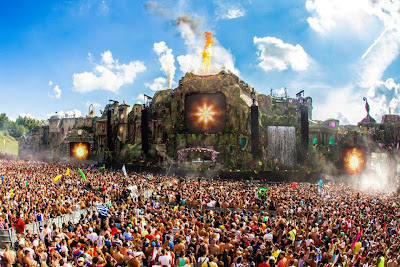 Tomorrowland 2013 came and went, it was a massive success yet again with thousands flocking to the annual event held in Belgium. Many of the worlds top DJ's were present to wow the crowds on the various stages over the three days. Today we look at some of the outstanding performances with highlights of their sets.

To be totally honest with you, I have in the past year or so began getting bored of his sets. It was almost like he chose to have the same monotone style and it wasn't entertaining any more. Though he is the worlds number DJ and before his set he announced to the crowd that his wife just had given birth to a baby boy and the set was dedicated to him and what a set it was! Totally blew me away and by far the best from the weekend and added to that, there was a heavy down pour during his set on the main stage.

He needs no introduction, he like AVB is a legend in the industry and I can go on singing his praises. The event organizers even made a tribute video for him with fans and other DJ's paying respect to his work. His set was nothing short of explosive and had the crowd jumping from start till end.

The local brothers and one of the main acts of the event never fail to disappoint. Their unique style really sends the masses into a frenzy and with constant interaction, they really are re-writing the way to do things. They again produced the anthem for the festival which is doing well on the Beatport charts.

Others such as Hardwell, Nicky Romero, Alesso and many more had awesome sets which can be seen on the official Tomorrowland Channel but those were the top three for me. Cant wait to see what Tomorrow World in the USA has to offer later on this year!