Over the hills and far away 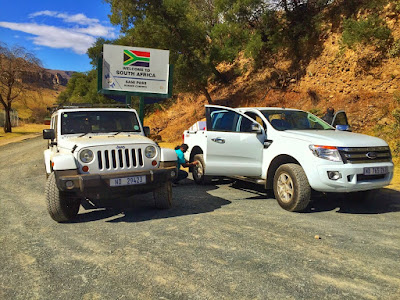 Growing up in the city, one is blinded to the plight that many in the rural areas face. We're lucky to have things so easily found and if anything was needed, a simple trip down to the shops or a phone call would get what was required. Even simple things like running water, electricity and a roof over our heads are taken for granted. With our modern, busy lifestyle, these thoughts never did cross our mind as there is always something else that was needed to be done or somewhere to be. I can't really say it is something we're guilty of as it isn't really something that should concern us but this past weekend, a group of friends and I set out on what was to be a typical "boys weekend" but turned out to be more than that. 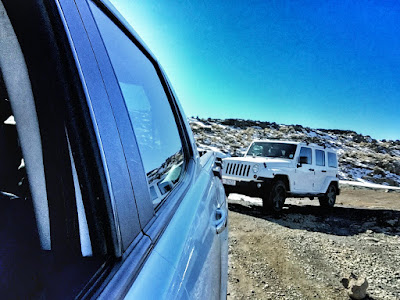 I've got a really great group of friends, as usual, we all can be idiots at times but that's the male species for you, there's nothing like a weekend away to forge those bonds, after all we are like brothers. From last year, it was in the works that we planned to venture into Lesotho via Sani Pass and stay the night, not only to brush up on our off roading skills but to also experience winter in one of the coldest parts of Southern African in the hope of seeing some snow on the way as we Durban boys don't really ever see it. After weeks of planning, most of which was done by our intrepid leader, Mr Nevin S Pillay, (Director at DNA Test and featured in April's issue of Forbes Africa Magazine), it was decided that the 2 day journey would have us depart Durban to one of the greatest mountain passes in the South Hemisphere, a gateway to South Africa's neighboring country, the Kingdom of Lesotho. 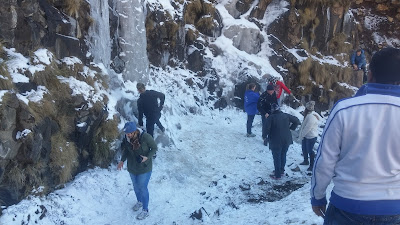 Not much was known about our place of stay for the night, we knew it was a small village situated about 2 hours from the border and it was founded by a Roman Catholic Missionary who set up a church in the area. Seeing that we were going to be there on Mandela Day, a day South Africans celebrate in honor of our former President who helped bring down the apartheid regime, we decided as a group that we would donate items that would benefit the community and help them keep warm during the harsh winter period. Friends and families were generous in their donations with us collecting a substantial amount items, enough to fill the bin of a double cab bakkie! 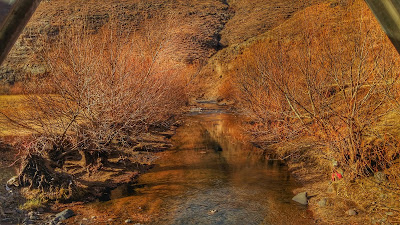 Once loaded up on early Saturday morning, our group of 8, in two vehicles set off  on our trek to Sani Pass, making a pit stop in Underberg for some supplies for the nights stay. The Pass still remains an ever growing tourist attraction with many daring to conquer it, whether it be by 4x4, motorbike, bicycle and even your own two feet! It is to be noted that only four wheel drive vehicles are permitted on the pass but some do take their chances. Navigating through the winding gravel road isn't as easy at it would seem with obstacles such as cliff edges, rocks and waterfalls to cross, keeping a good pace, and following the rules of the pass is a must or you could end up in a ditch, as we encountered someone who found them self in one as we were heading up, helping the couple out was our first good deed of the day, once they were freed, we continued the ascent to the summit.

Being winter, it would be pretty dry but with the cold temperature and snow fall from the previous day, most of the waterfalls towards the top were frozen. We pulled off to join the others who were enjoying the snow and taking pictures at the frozen marvel. This was my first encounter with snow, gathering a handful to make a snowball then realising how cold it actually was, numbing my fingers in a matter of seconds! After a few snaps with the frozen water and fooling around in the snow, it was time to get going again as the summit was close and there was a small matter about a Springbok game to watch at the highest pub in Africa.

The pub which is situated a the top of Sani Pass is 2874 meters above sea level, a one of a kind establishment which has a limited food menu but quite a good selection of beverages, the most popular being the local Maluti Lager. As said before, the pass is becoming quite popular and with the rugby game being on, it was more busier than some pubs in the city! With daylight still on our side and an unknown road ahead of us, we decided to make the most of our advantage and head for the village of Molumong where St James Missionary was situated in. 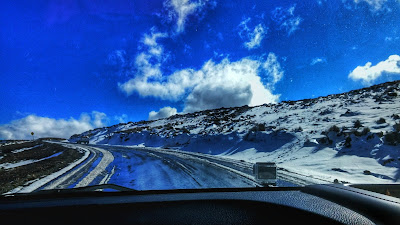 There really just was one road we could use and thankfully it was good as new, well some parts were being laid as we drove past thanks to the Chinese contractors who work 7 days a week on it! The road took us though the Thaba-Tseka district which meanders through the mountains, upon which we were greeted by even more snow and iced up roads. It was truly a site to behold, I felt like a kid snapping away pictures of the snow filled mountain side, as much as we wanted to stop, we had to make headway as there was still a long drive waiting for us. 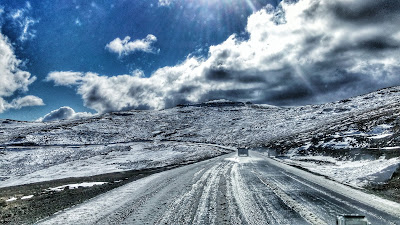 After about an hour of driving, we finally reached our destination which wasn't as straight forward as it seem as it involved us thumb-sucking a turn onto a gravel road, through the Sehonghong Gorge (which is quite a sight in itself) and eventually arriving at the St James Lodge. It was quite a humbling experience for myself, being used to home comforts, having a look at the lodge didn't bode well for me, for one it didn't have any electricity, no more complaining about load shedding for me! The Lodge was not bad, it just wasn't something I was not used to but no one else in the group minded, it was all about the experience and that's exactly what warmed me up to the place.

We were practically one with the community, with the Missionary a stone throw away. Meeting the people of the village and seeing the joy and appreciation of the stuff we brought them was heart warming. It really is a struggle for them in remote places like this to get things that we normally take for granted. Spending the night in minus temperatures with just the warmth of a blanket really opened my mind as to what people in areas like this go through, I was still lucky enough to have a decent bed with plenty of blankets, not to mention a roof over my head. Others in the village live in small huts with no access to running water and zinc enclosed outdoor toilets. I couldn't manage to leave the warmth of my bed to use the bathroom in my room, these people have to leave their house to make use of the facility.


After spending a night there, it was an eye opener to the reality of how others live their lives with whatever little they have and are content with it. Here in our society we have people who have almost everything but still lead unhappy lives because they're always searching or wanting more. If only more people could see life in the way people of this community does, it really would make the world a better place. The heartfelt gratitude shown to us by the members of the Church and the Pastor will be long remembered and made it the highlight of the trip. 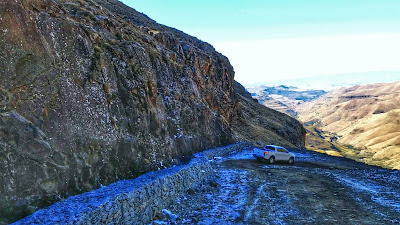 As the saying goes, "what goes up, must come down" and as much as I enjoyed my stay there it was time to go home. On the way back we had a lot more time to take in the views and beauty of what Lesotho had to offer. Although it neighbors the Drakensburg Mountain Range, there's something about the Maluti's that make it seem extra special. We even got a chance to play in the snow again! This time I learned my lesson, I wore gloves when handling the ice powder....but then it melted and my gloves got wet, so it didn't really work for me . 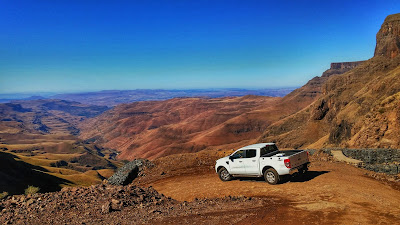 Going down Sani Pass is much more tricky than going up as you have gravity pulling you down the steep gradients. You have to be gentle on the brakes as not to over heat them and could cause you unnecessary problems. Luckily most modern vehicles like the ones we were driving with have down hill decent assist which helps keep the car at a steady pace without you having to apply brakes all the time. As we got closer to the east coast, the warmer weather was much welcomed as we peeled off the layers that kept us warm through the morning. Thinking back to what was suppose to be just a fun boys weekend, turned out to be something more, something that will live with me forever, some great memories were made and I hope many more to be made in the future. 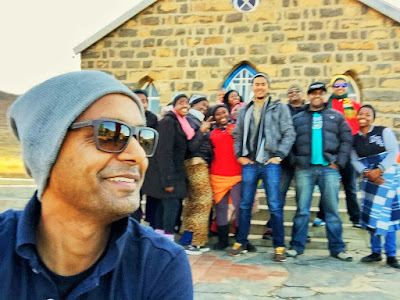