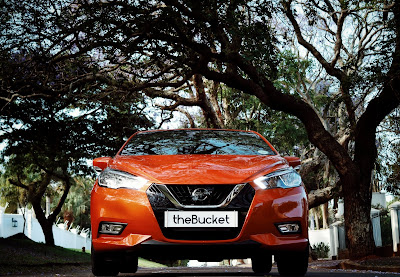 The Nissan Micra was first launched in South Africa in the early 2000's, controversial in design but appealing in price and offering. It was Nissan's 3rd generation of the model but it would be the introduction of it to the local market and everything about the car was a bit odd, from the design, to even the advertising catch phrase "do you speak Micra?". Regardless, sales were pretty decent for the odd bubble shaped automobile as many were spotted on the road, the next generation Micra saw changes made that made the car look a bit more normal to the consumer but it still maintained that bubble like shape but by then it didn't seem too odd to see on the road as many other European budget hatch backs had infiltrated their way into the country and the Nissan Micra had some competition but competition is always healthy right? And it's with that the all new 5th generation Micra which was launched this year in SA has not only grown but gained a lot in terms of advancements and offerings, I was behind the wheel of one for a week and here's some of my experiences with the all-new Micra. 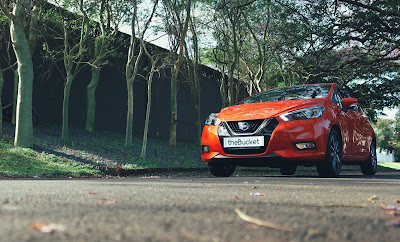 First thing's first, wow, Nissan, wow, you guys knocked it out the park with this one. From a something that used to look like a fishbowl to this, really took some guts and balls but you guys pulled it off and it works 100%.  The design of the new Micra is clean and edgy, I love the way the cars lines are focused in the front where they come together are the nose a move outwards to wrap around the rest of the car. There are elements of various other models in their range, with some hints of GTR here and there, put in playfully of-course. The car has gotten a more sporty nature, with it's flares and stance, the colour offerings in the palette also emphasize this. If Nissan were to make a sporty version of the Micra, they need not have to do much to the overall design as this one really does looks like it has some venom to it. The year of the car features the rear lights almost in a C shape which follows the contours of the car and the rear window transitions to the side with the black pillar. On the inside, it's more of the same good looks, the interior layout just works well, there's a lot of attention to detail when it comes to the materials and textures but overall it gives this hatch a premium feel and look. 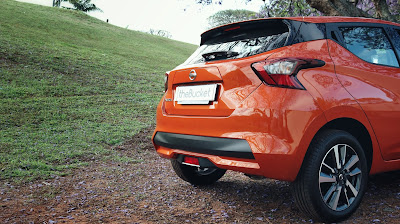 Seems like the high cost of fuel is forcing manufactures to break the molds in engine displacement as the Micra features a 0.9L Turbo. This engine definitely doesn't feel like a 0.9 when you're running around town in it. It's zippy, the engine has a lovely tone to it and most importantly it feels solid.  Efficiency on this engine is superb, with me achieving close to their claimed combined driving average of 5.1L/100km. Driving the Acenta Turbo variant of the Micra, the engine pushes our 66kW with a maximum torque output of 140Nm. Handling on the Micra is precise and smooth, just like the brochure says, its almost like a point and shoot, the car goes well in a straight line but doesn't fluster when a few bends get thrown at it. The body structure is stiff and hugs the ground well, making the ride feel very secure. 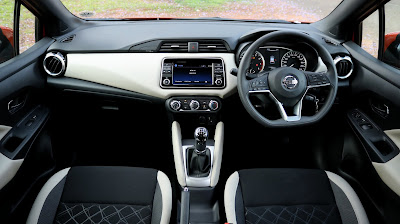 The Micra has grown a lot from the previous generation and that means more space in the cabin. While the older model had the driver position much higher, the new Micra's driving position is lower and very driver-centric with the low center of gravity. The seats are big and comfy, also come in dual tones of colour and some awesome swatches to choose form. The multiple array of textures and material in the cabin really give the car a premium feel, I love the addition of leather to the dash around the infotainment screen and extends over to the front passenger. The side panels around the gear selector are also covered in leather and are reminiscent of the GTR . The car comes with standard air condition dials but are neatly laid out just below the radio. I found the infotainment screen really easy to use and pairing with my smart phone was also very simple. Moving to the rear, while not the biggest, there was sufficient space for people to sit in comfort. 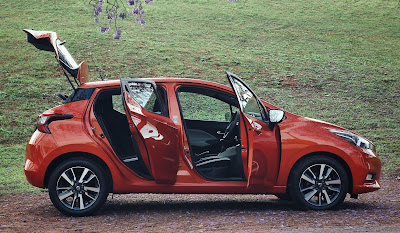 The Micra comes with Nissan's Intelligent Mobility system, which has the advanced drive assist display that is designed to keep the driver focused on the road ahead of him with minimal distractions from the phone. The high definition 5" TFT display brings you all the information you require when hooked up to Apple Car Play, this also doubles up with voice control via Siri. Unfortunately I don't think the system was geared up for Android Auto but with it not being officially available for SA use, that shouldn't be a major issue as the bluetooth connectivity worked just as well. 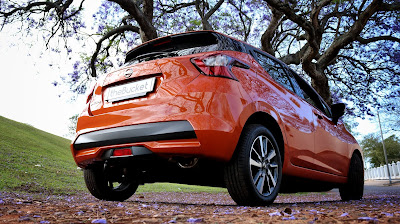 Overall, this is a superb re-introduction if I could say that, to the market of the Micra. While the previous models were not every bodies cup of tea, this new model will certainly have heads turning for all the right reason and you don't even need to "speak Micra" to understand it. There are various styling packs available for the Micra, like different paint designs with decals and colour options for the rims. In our tough times with the ever inflating petrol price, the Micra is a welcomed addition in the market of hatchbacks. Whether you're navigating your way through traffic or hitting the open road, you definitely won't be disappointed in the new Micra, it delivers a perfect balance no matter what style driver you are, it certainly is one of the better packaged cars on the market and it's improved looks will certainly play a big part in gaining more interest. 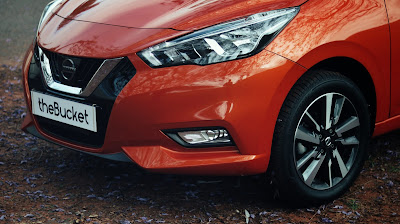