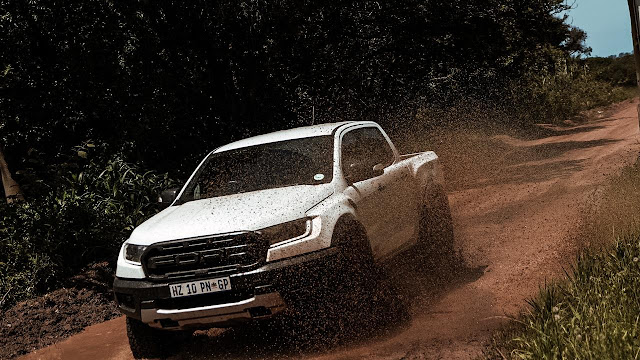 We've all seen that Top Gear Special, the one where Jeremy and James had to go up a snow capped mountain in V8 pick-up trucks to rescue Hammond. Jeremy used a Ford F150 SVT Raptor Hennesy edition which was equipped with a beast of a V8 engine. That's when we all Googled and fell in love with what Ford USA had in-terms of performance "bakkies" as you would have it. It took a few years but it seems that Ford realised that the local crazy for this sort of vehicle is quite real in the local market and hence the Ford Ranger Raptor was brought in. Now this is the first Ranger Raptor made, Raptor models were only the F150 variant in the US, and those are quite huge. Not suited to our local roads nor our local drivers. When it came to marketing the Ranger Raptor, Ford did it right, from the very first testing to the international launch and then the local launch, giving the public info that had petrol heads salivating for more. Better news came in just before the local launch that the car would be assembled here in South Africa, so even better reasoning to own one.  I got drive the Ranger Raptor for a week and here are my thoughts on this beast of the bakkie world. 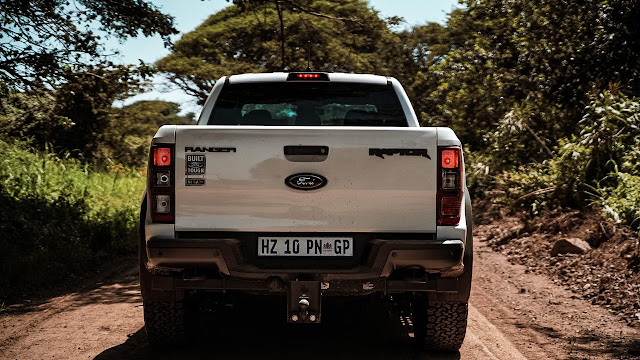 When it comes to performance cars, there is a fair about of changes in the body work to make it look the part, this is where I commend Ford as they've certainly made the Ranger Raptor look fierce and menacing. Changes come from all over with this one. The car comes fitted with a wide body and not just a kit, the arches are further flared and have robust plastic on the edges. The front bump is raised and more slim line creating an even wider look to it, it's also made from that robust plastic that follows through along the sides. It has a brushed aluminum scuff plate in the front, to protect the engine from any rocks or unwanted objects and a revised grille with Ford in big and bold. The lights with the daytime running LED strip add character to the overall look of the car. Raptor stickers are prominent on the sides and a Raptor badge on the back. The back bumper also has a reinforced steel bit underneath which is connected to the chassis for extra strength, The car comes fitting with huge side steps, like these are the widest I've even seen on a bakkie or SUV, I guess the wide frame caters for it but they do get rather dirty, especially when you flying through mud. The Raptor has 17" multispoke rims which are fitted onto huge all terrain tyres which are there for functional purposes but add to the look. 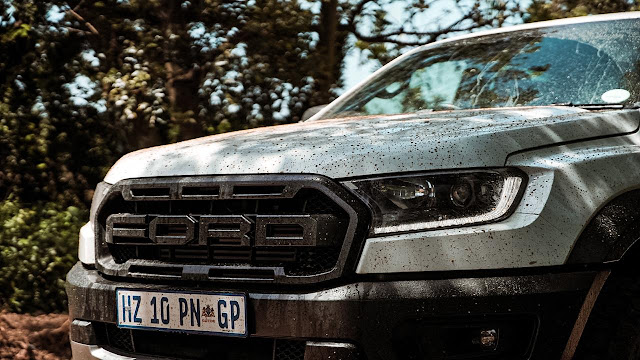 Now while we all dream of a Ranger with a big noisy V8, practically it wouldn't make sense, hence Ford put in a whole new 2 litre bi-turbo diesel engine. Now there were a lot of purist shaking their head at this, firstly it wasn't petrol, secondly it wasn't a V, not even a V6 but in-terms of performance delivery, it was killing it man! 157kW of power with 500Nm of torque , combine that with the 10 speed quick shifting gearbox gives you better peak performance than the regular 3.2L motors. While they want this bakke to go fast, they just don't want it to perform on normal surfaces but all types of surfaces, hence the multi-terrain mode with Baja, Sport, Weather, Mud/ Sand/ Rock Crawl and Normal. All part of its cutting-edge terrain management system. Baja Mode dials down traction, improves responsiveness and shifting speed while optimising the performance on high-speed desert runs. The Ranger Raptor comes with 2.5" FOX Racing shocks as standard, this coming from the teachings of the F150 Raptor's race-bred suspension and crafted for this vehicle. I took the Ranger Raptor on some dirt/ sand/ and mud driving, how the car remains composed to the change in surfaces is simple sublime all while maintaining speed and stability. It really is so much fun on the dirt roads, you have to experience it to know what I'm saying. 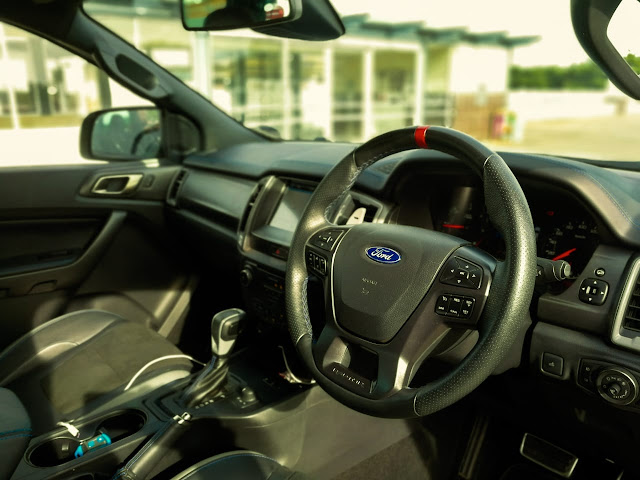 While the Ranger Raptor does have sports shocks and suspension, the comfort of the ride is pretty good. I mean at high speeds on gravel road there is minimal cabin noise, not that much shudder, I would be like if I said it was smooth but it was smooth as you can get in a bakkie. Space wise, the cabin is the same size as your normal Ranger, the wide body does nothing for the increase in cabin space but it's spacious none-the-less. It seats four adults with ease, with generous leg room for the rear passengers. It has dual zone climate control which is controlled via the big multi-media touch screen which has Fords SYNC3 loaded onto it. It has mobile applications built-in so if you have Apple Car Play or Android Auto it's just plug and play. The detailing in the interior is pretty rad, the front and driver get sports styled seats, with Raptor stitched in below the head rests. There's a leather dash with different colour stitching, the instrument cluster is more sportier with illuminating needles in red and the steering wheel has a thick red marker on the center to let you know when it's straight. 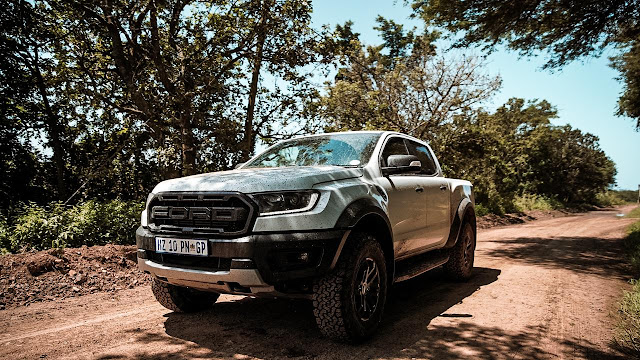 Like many, I was a bit apprehensive about this model, the Raptor name has a lot to live up to after it's cult history in the US and with an introduction to it in the Ranger line-up, it had a lot to do to change peoples perceptions on it. Well it certainly changed mine, the engine is a peach, so responsive and with a great noise to it. The styling is on point, and while the car is wide it has many driver aids to assist you in navigating it around, from lane departure warnings to reverse camera. Being a diesel motor, it's also pretty fuel efficient with me getting just over 700km on a tank. The tech it comes loaded with beats some family sedans out there so while it may be a work horse its very practical too. The bin might be slightly smaller than some bakkies but more than adequate for general storage, but please, if you do buy one, do not put a canopy on it, it would just ruin the look of the car. I am left seriously impressed by the Ranger Raptor and it is a firm line in the sand as to where and how a performance bakkie should be made, so the competition need to up their game in this aspect. 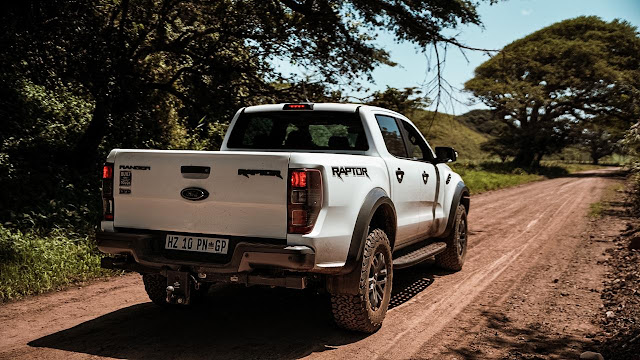