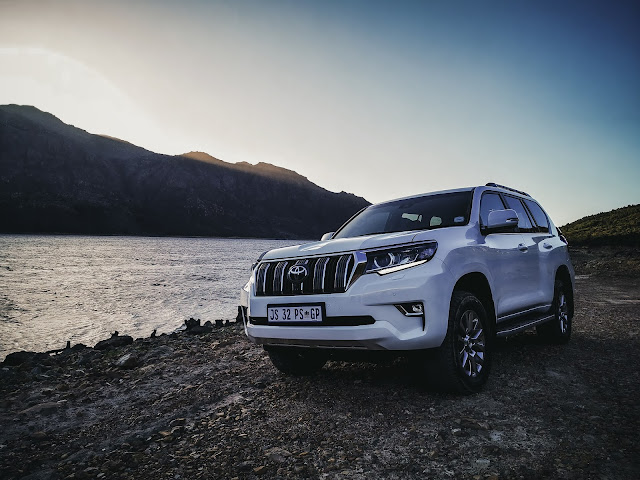 A month back I found myself in the mystic Cape Winelands, it was my first trip back to the Cape since the pandemic and while I normally choose the hustle and bustle of the vibrant city, this time round I opted for the peaceful and majestic Franschhoek to spend some much needed time off. I was fortunate enough to have the new Toyota Landcruiser Prado VX-L to help navigate through the mountainous regions that give harvest to the finest wines produced worldwide. It was the perfect vehicle for this as it gave me the opportunity to do a little exploring while in the area as well. 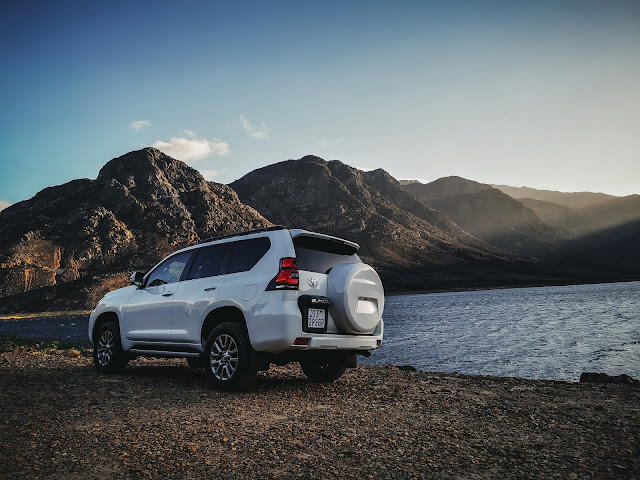 The new Toyota Landcruiser Prado VX-L is the range topping model, previously was fitted with the 4.0L V6 engine but now has adopted the new Hilux 2.8L Diesel motor that churns out 150kW and 500Nm of torque. While the engine downgrade might be a head scratcher for some, if you've drive the previous 4.0L variant you'd know that while have an extra 52kW output, it wasn't the most logical option and proved to be uneconomical. This new motor however shines from the time you switch it on, the ride is smooth, with plenty of torque on tap available for take off and while the kW output might not win any battle of the SUV's you must remember that this is a premium SUV with 7-seats. It's meant to be climbing dunes, scaling escarpments not drag racing on a flat runway and with the full 4x4 capabilities all neatly packaged on the driver's center console, it makes navigating even the trickiest terrains a breeze. 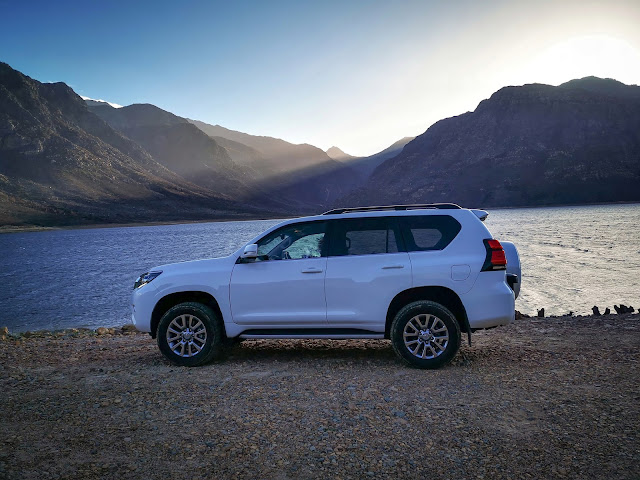 Seeing that I was in Franschhoek, and living at the bottom of the world famous Franschhoek Pass, you bet I drove the pass a few times, most memorable was chasing the sunset from the valley, up the pass and watching it from the Threewaterskloof Dam. It was good to see the dam levels full as previously when I was in that part of the country it was close to bone dry. I wasn't expecting much in terms of performance from the Prado on the Pass but it did surprise me being able to take some of the bends faster than I thought it could handle. The nimbleness of a big a bulky vehicle like that which won't win any type of aerodynamic wind tunnel contests just blasted its way though. The large tyres  held the car in the lane and Toyota's Adaptive Variable Suspension (AVS) that adjusts the shock absorbers' damping levels kept the vehicle calm and composed while maneuvering thought the twistys and the engine was also on-hand to deliver that torque boost of acceleration when needed. 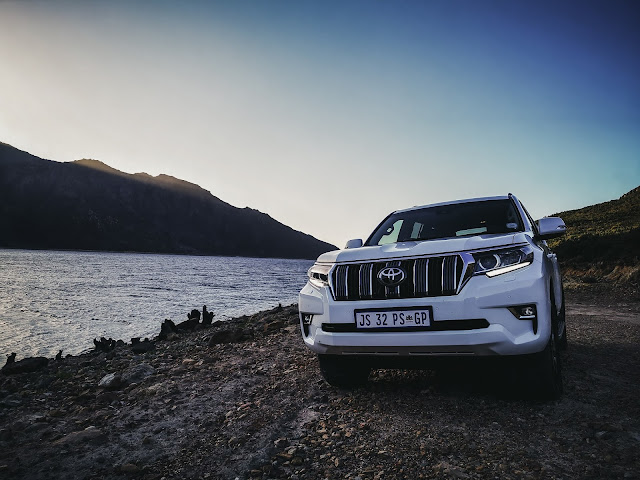 The Prado comes equipped with High-Beam adaptive LED's which light up more than your road, the lights extend out onto the sides so you can see for any objects should you go off-roading in the dark. There is also the multi-camera system to ensure you have clear visibility on screen of what's going on around your car. The car also has front and rear PDC's and self-parking which helps when needing to parallel park this behemoth in town. It has a 14-speaker sound system which includes a subwoofer that was well tested, with the sounds of Kanye West and Drake reverberating through the mountains during my time there. 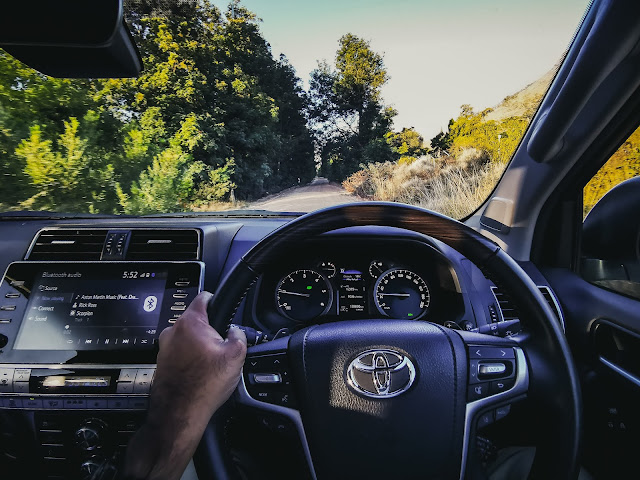 Comfort wise, you can't really fault anything in the Prado, while some might say the interior is dated, there is a new model due in the next 2 years so it wouldn't make sense for Toyota to make a major overhaul of this one's. The seats are large and comfy, the leather is of a good quality and extended onto the dash and doors. Some of the materials used do feel a bit plasticky but at the same time you need something robust and easy to clean if you are going to be going off-road quite often. Technology wise, its still pretty practical with a large touchscreen infotainment screen, the car now comes with mobile apps preloaded so you can make use of Apple Car-Play of Android Auto, there is the option of using Bluetooth as well. Driver and front passenger have separate zone climate control aircon with seat heating and cooling. The second row seats also receive this luxury along with seat heating, while the 3rd row just get single zone. The 3rd row seating is neatly folded away and operated via a switch in the luggage space or the second row which unfolds or folds the seats quickly and easily. 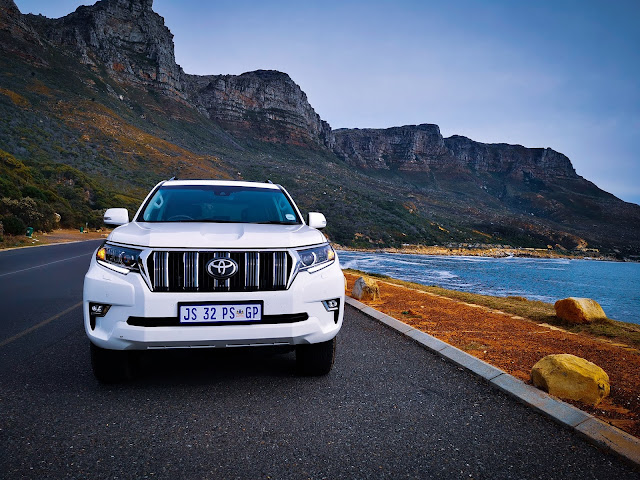 Luggage capacity in the Prado VX-L is, how the former Orange president of the United States would say is "HUGE". With the 3rd row seats folded down you can get your whole house in there along with the kitchen sink. The lateral opening tailgate helps to load and unload with easy, also saves short people the embarrassment from trying to jump and reach for buttons or pull to close. The center glove box doubles as a fridge for you to store four full size wine bottles to keep chilled while you head out for picnics or scenic drives.  I mean, when in wine country, might as well! 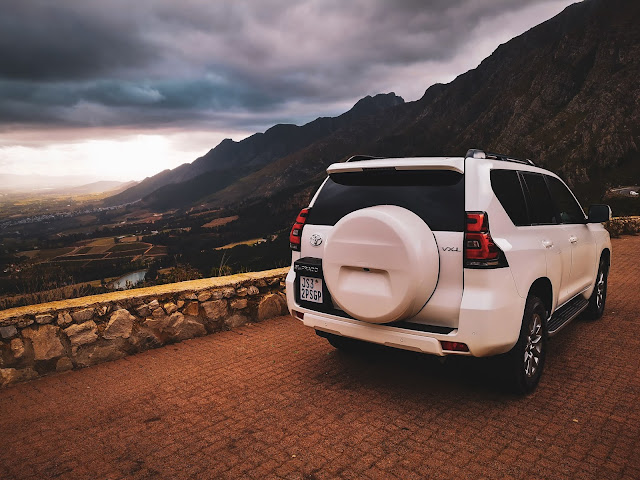 Overall my time with the new Prado was sublime, yes there are certain aspects that seem dated with the car but at the end of the day, people who buying this car aren't going for the fancy stuff, they want to know they have a well capable off-roading machine that can double as a comfortable town car and this fits the mold to perfection. Its comfortable, luxurious, practical and in all fairness still looks darn good to me. It fitted in well in its environment and managed to turn a few heads on our escapades. With its dual fuel tank that has a combined total of 150L, the range of the Prado could give you well over 1200km if driven properly. I can assure you that the reduced size in engine has no major performance impact on the overall performance of this vehicle, if anything it's a bit better if you ask me! 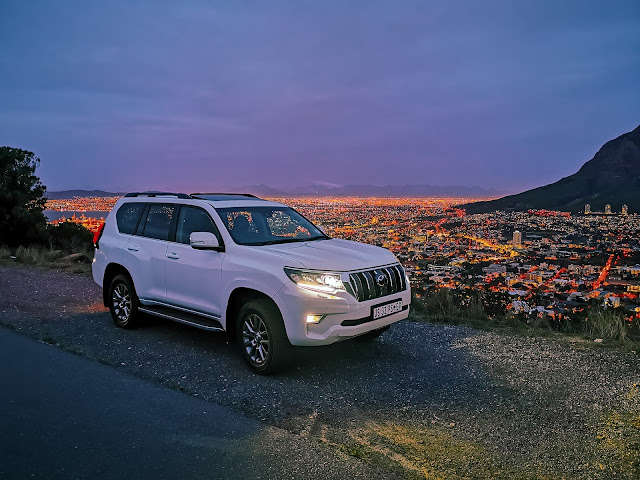 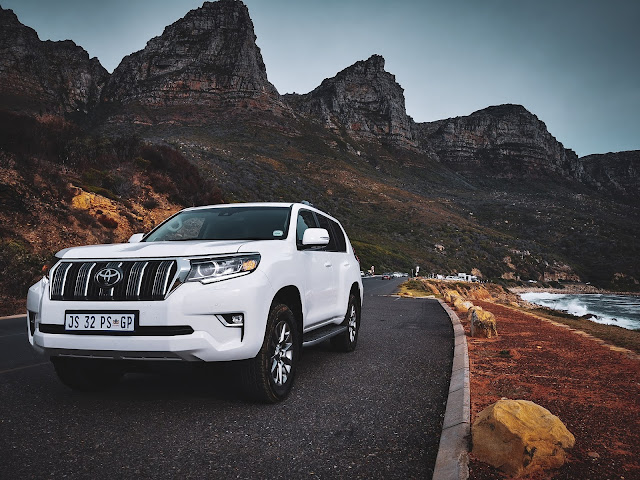