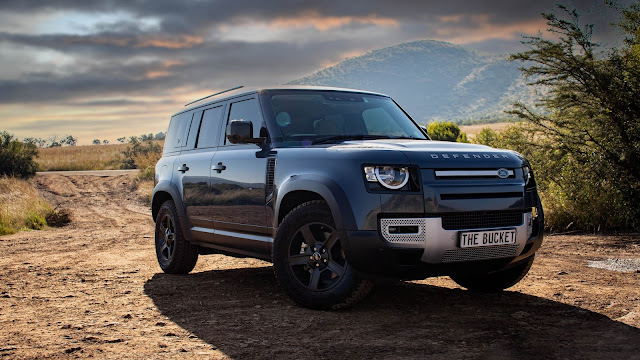 When it comes to Land Rover, there's nothing more iconic that the Defender. The model has etched itself into the history books as the father of off roading vehicles, there is no path or terrain too tough for it, and it is why legendary explorer Kingsley Holgate chose this specific car for his quests. But as with most good things, it has to come to an end, you see for years Land Rover hardly tinkered with the Defenders design and chassis, I mean why ruin a winning formula right? Alas, with its rigid design and heavy chassis, not to mention its high gas guzzling engines, the EU were not too happy as this single car didn't meet their guidelines for the CO2 levels, so the Defender faced the axe. Thankfully the company decided to re-invent the Defender, this was not an easy process and at first it was done behind closed doors, the world did not know that a new Defender was in the making but soon enough word got around about this new Defender and the purist were not happy. In essence they had a leg to stand on, how could you recreate something so robust but meet the requirements in motoring? It surely wouldn't live up to the true Defender standard! I suppose that is why the research and development took so long, Land Rover engineers seeked out differently materials, to make the car light weight but robust and tough to withstand anything nature placed in front of it. Suffice to say, when launched, the world was amazed because Land Rover didn't just have a normal launch but rather showcased what this new model could do and since then it has been a hit. I was lucky enough to get behind the wheel of the new 110 in April, this is what I thought of the new Defender. 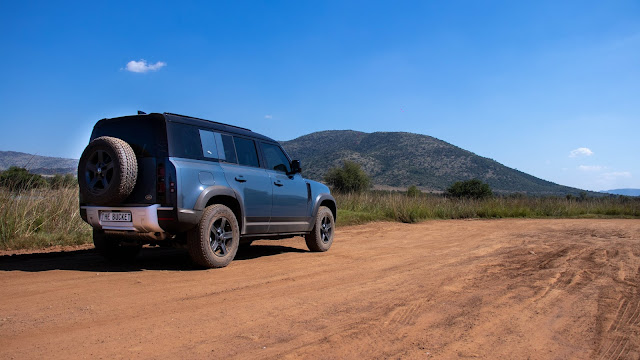 Lets be honest, the old Defender wasn't much to look at, at best it was a box with wheels and something a 5 year old could draw almost to detail. While the later models did have design tweaks to make it look more appealing, there was hardly anything aerodynamic about it. This new one however follows the same design principals of the old one but somehow they manage to make it look amazing, the overall structure still seems ridged but with subtle folds and curves, making the car as a whole look softer and definitely has enhanced its aerodynamics. It is almost as if the designers designed the outer shell first and sort of made everything else just fit in. Take the front headlamps for example, the taper follows from the bend of the bonnet straight down and the lamps seem to be placed inside that mold with a cut out for the beams. The front end is very minimalistic but has that bold stature to it, the front mud splash plate with perforations in brushed aluminum breaks the monotone paint of the front end as well as the single bar grille which has the Land Rover badge prominent on the side. The wheel arches are accentuated by the robust black plastic outer covers, ensuring that the paint work doesn't get damaged should you run into some tight spaces. The iconic side vent is also featured just behind the front wheel arch. Speaking of iconic designs, much of the old has been replicated in this new model, like the sky light wells on the roof bend as well solid square panel that separates the rear window to that of the boot. The straight edge back is also prominent but with the new LED tail light design just gives it that modern feel. The large 18" rims fitting with All-Terrain tyres makes this brute look all the more intimidating. Land Rover really have done a stunning job on this redesign and it had people turning heads everywhere I went. 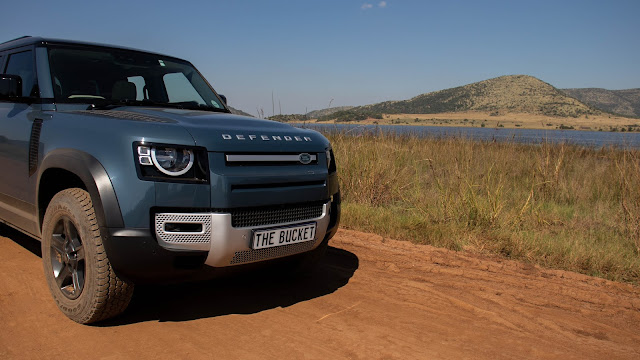 This particular model was powered with the 2.0L diesel motor which was more than adequate to propel this monster. Power output on the motor was 177kW with 500Nm of torque, while those figures might not seem that great for a big van like this, I assure you, the Defender on the road is no slouch. Even with its 2.3 tones weight, it is quick off the line achieving a 0-100km/h time of 9.1 seconds. Max speed is topped out at 188km/h which you may find funny but with this diesel engine, it picks up speed over 100km/h quite fast, so if you don't really watch you could very well reach that speed sooner than you realise it! Being an all-wheel drive pure off-roader, we had to put it through its pace on the rugged terrain. What was suppose to be a 2 hours game drive in the picturesque Pilanesberg National Park, turned into 6 hours just because we were having so much fun driving it around the dirt roads. Getting to areas where people spotted game was bliss with the Defender as it navigated its way around crevices, potholes, rocks and loose gravel. The car just gripped and went, there was nothing too difficult for it to go over and hardly had me breaking a sweat. There wasn't much spots to test out the wading depth, plus I didn't want to disturb any of the Hippo's in the water but Land Rover claim a wading depth of 900mm with the air suspension. 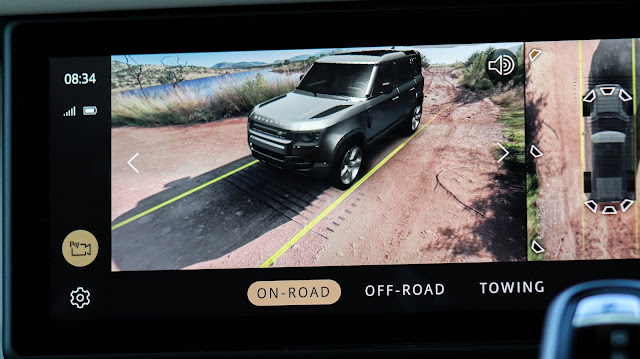 Being one of the latest models from Land Rover, the cabin isn't kitted out in multiple screens like the Range Rovers or Discovery's, the cabin is as minimalistic as the original, the 10" touchscreen looks small just because of the sheer size of the dash but has amazing features such as the interactive driver display, smartphone pack which has built in mobile apps. When it comes to technology to assist the driver, the Land Rover Defender comes with all the safety features cars this size should have and whole lot more, such as lane keep assist, blind spot monitoring as well as park assist to help park this boat. The 3D surround camera assists off road too as the Defender even has a camera under the chassis, which allows you to change views to avoid obstacles under the car. Its extremely impressive as real time so that you are seeing what you are actually driving over. The Defender comes with LED headlights with auto high-beam assist, which I always vouch for on new cars. The side mirrors are heated and electric with power fold should you need to tuck it away to avoid obstacles or just to keep it neat when parked. It also has approach lights with the Defender logo when unlocked. An awesome feature to the Defender has to be the rear camera which is mounted on the fin, which is activated when you flip the switch on your review mirror. This is added should the drivers vision be obstructed, by either his load or dirt, this will be a method to still see the rear. 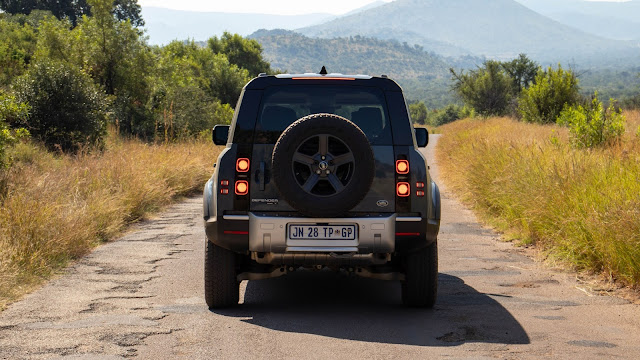 When it comes to big SUV's like this, which are purpose built to travel on the roads less ventured, comfort isn't high up on the list of things it should be but that is where you are wrong. The Defender is super comfy and while it might not be as luxurious as its sibling the Range Rover, it's built with robust materials, from the dash to the seats, making use of easy to clean but also very durable fabrics, leathers and plastics. The shell itself is plaster, this is so if the cabin does get flooded, its easy to clean and dry. The leather seats are practically water proof and you hardly will see any stains. The car comes with three zone climate control, with the front driver and passenger getting the dual zone while the rear passengers can battle it out to what temperature they want. The sound system is pretty decent too, with a multi speaker hifi quality sound throughout the cabin. Luggage capacity of the Defender is brilliant, because of the width of the car, you can load so much more into it. Golf bags can fit horizontally at the back making a trip to the course with a four ball so pleasant. On the road, the ride is extremely soft and comfortable thanks to the air suspension, and because of the tight seal on the cabin, you don't even get the road noise from the all-terrain tyres when traveling on tar roads. Speed bumps are like a joke to this thing, not that I advise you to drive fast over them, but its nice to know that it hardly shakes the Defender. 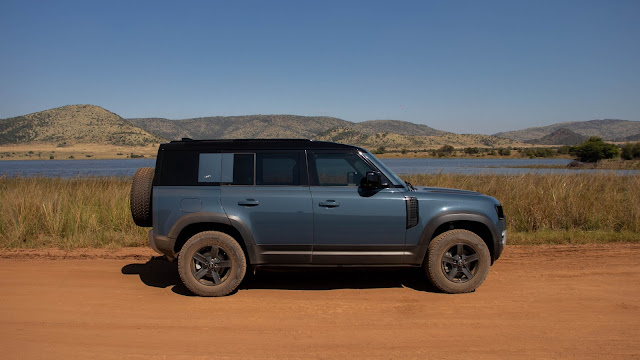 So the big question is, has this new Defender lived up to its critics as being a fitting example to where the badge? The short answer is yes, it definitely has. There is only so much I can write about to convince you about this car, the proof is getting behind the wheel of it and seeing exactly what it can do. While I didn't even do half the things this car is capable of doing, I am thoroughly impressed by it, I do plan on taking it through Land Rovers off-road track at their experience centre in Joburg soon, just so I can have more fun with it but overall, what a sublime vehicle it is, it's going to write its own legacy and be one of the greats just like the Defenders of the past. 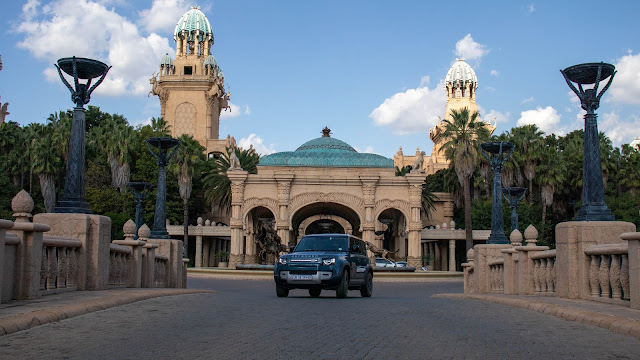