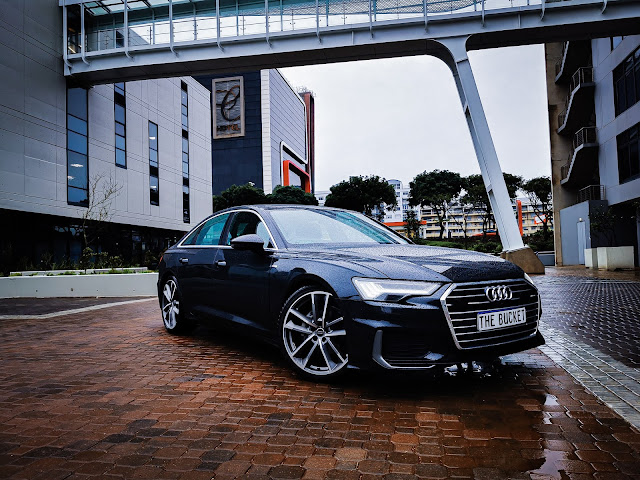 We've all seen the movie The Transporter, Jason Statham, in a slick black suit driving a luxury German Sedan in black, getting things done while pushing the car to its limits and more often that not, wrecking it. I'm not saying I felt exactly like him but with this particular test car it came close, I had the new Audi A6 40 TDI on test for a few days and yes it was in a black, with the S Line finish and my God did it look good! The kicker was, if you thought it looked good during the day, at night it looked even better. Audi's new design language has taken a turn for the better, not that their designs have been bad in the past but there was a progressive upward trend in them and quite honestly, what we seeing from the e-Tron stable which is being migrated into their current range is certainly affirming their status as a major player in the German market. Due to Covid restrictions I was only afforded a few days instead of the full week I would normally get the car on test, but as they say, beggars can't be choosers and even a few days in this luxury sedan was better than none. 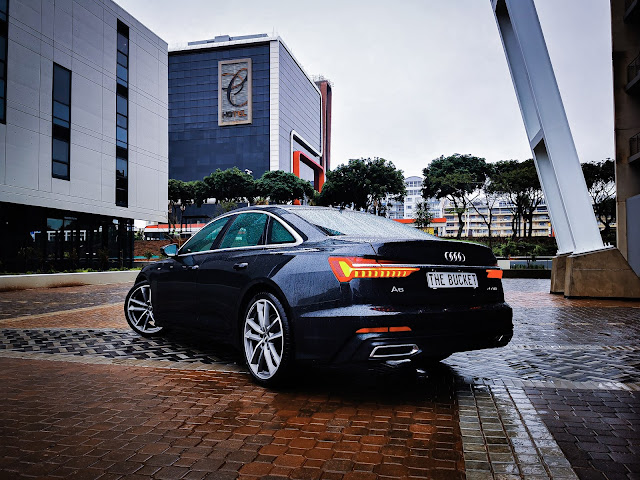 Like I said earlier, the A6 is quite a looker, and in this particular segment that a key characteristic that can set you apart from your competitors. One of the German manufacturers found this out the hard way when their model which basically looked like a scaled up version of a smaller class but they are rectifying that lapse in judgement of design. Getting back to the A6, it came in the S Line trim, which had some extra details to make it stand out, like larger air vents on the sides with brushed aluminum finish, massive 21" multi-spoke wheels, that large grille the stand out design feature, sort of the focal point of the car. Audi's party trick of recent is the laser lights, not only do they look fantastic but the animated display it has when opening or locking the car will have you and the bystanders just watching in fascination as the sequence unfolds. Much of the design is the same as the previous generation A6 but with sleeker lines and sharper edges, giving that futuristic feel. The car definitely has a more premium look to it, almost closer to the A8 than the baby A4. Stepping inside the car, its like getting into a space ship, Audi have replicated the Q8 interior and customised it to suit and fit the A6, it's a blody marvelous space to be in. 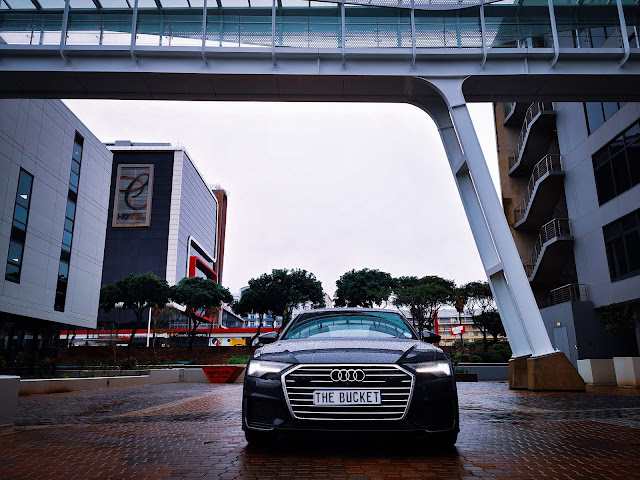 Now Audi's new model naming configuration still has many scratching their head and I don't blame them as I was pretty baffled by it first but then you realise its pretty easy. This model being the 40TDI, the 40 translates to an engine output of between 125kW to 150kW, most of these engines in the 40 line-up would be 2L. The A6's engine pushes out 140kW with 400Nm of torque and an electronically governed top-speed of 250km/h. Economy on the car is pretty good, as expected with an Audi TDI, with a claimed average consumption of 5.2L/ 100km, I managed to achieve 5.9L which isn't too bad seeing that I was doing mixed driving and mostly in the rain where I really got to test the Quattro system out. Needless to say the Audi A6 delivers in every aspect of performance you can think off, the turbo diesel motor is simply sublime, almost zero lag on take off and when flicked into sport mode, she gets rather excited with all that torque so be-careful! 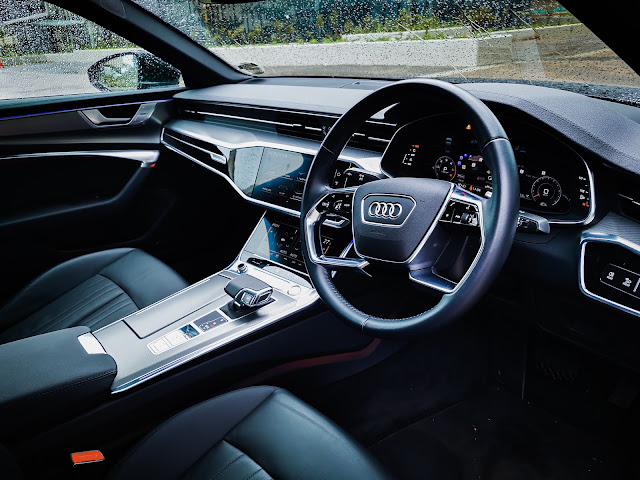 I had to limit myself from talking about the interior earlier in the review as to save some info for this part, while the A6 has a carbon copy interior of the Q8, it is made quite well to suit the cabin of a limousine rather than have that SUV feel. The textures and materials used in the interior are by far the best I've seen in this class. With high gloss piano black finishes on the dash to silver and chrome detailing around the cabin. The straight edged vents on the dash set the tone of the cabin, the main feature being the dual touch screens, the first for the MMI touch screen infotainment unit, which has soft touch sensors to select your option, the screen below for your front dual zone climate control. The car came with Audi's virtual cockpit, which in my opinion is a must if you're buying any Audi these days. The multi-function steering wheel is laid out pretty well with all the important buttons at finger reach, ensuring you won't have to take your eyes of the road to make the volume higher. The seats, ultra comfy with seat heating functionality for driver and passenger, perfect for those long drives which would be perfect in this car. The rear passengers also enjoy loads of legroom and get super comfy seats too, no seat heating though, but they do get dual zone climate control on a pretty nifty touchscreen unit as well.  Ride quality is superb in the car, its pretty close to floating on air if I had to say so myself. 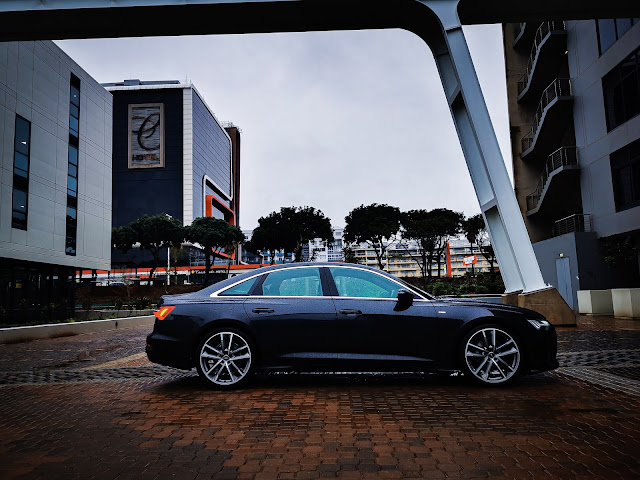 The car is loaded with great tech, the main talking point would be the 10.1 inch infotainment unit which is equipped with MMI Navigation Plus, its pretty easy to use and in future will feature Audi connect which has just recently launched in the country. The car does come with Apply Car Play and Google Android Auto preloaded so its a simple plug & play set-up. The car has multiple USB ports as well as a wireless charging mat for your smart phone in the hand rest compartment. A good way to ensure your phone is tucked away while you're driving. The premium Bang & Olufsen 3D sound system is brilliant and adapts to the type of music you're listening to, ensuring sound quality is always perfect. The A6 is a large car and has an optional camera package which has a 360 degree view finder to see your surroundings, this coupled with the PDC's makes parking a piece of cake. The laser lights not only look cool, they serve a great purpose when driving at night, with the adaptive function which switches on the brights when needed and if no other cars are around as well as lights up dark patches on the side. The car also came with adaptive cruise control with swerve and turn assist. 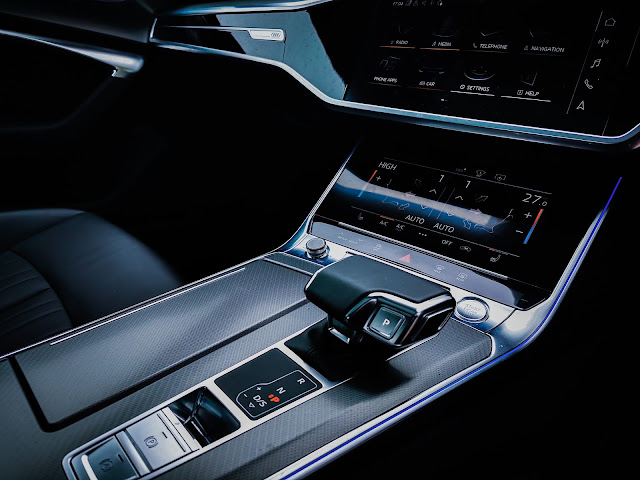 A pretty well rounded package if you ask me, well seeing that the base price is just over 900K, you'd expect it to be packing nothing but the best. At the moment Audi are only offering the A6 in diesel derivatives, with the other engine option being the 45TDI, the only petrol option being the sporty S6 which is leads to the RS6 Avant that touches down locally some time next year. This segment of cars is by far my favourite, I'm a big lover of sedans and the luxury is offers, the appeal of SUV's hasn't gotten to me yet and when cars like this roll into my driveway, you definitely feel badass driving it, not sure if that's the Jason Statham/ Transporter vibes coming off or just the appreciation for a great sedan. Overall, the A6 is good as what it's meant but with so much more on offer, the luxury family come business sedan just got promoted to an executive sedan, with technology you'd expect in range topping models. The ambient lighting on the interior along with the finishes make you feel like you're in a first class cabin. The ride and comfort is on point, couple that with the great looks and tech, this is in my opinion the current market leader in this segment. Top notch Audi, bravo. 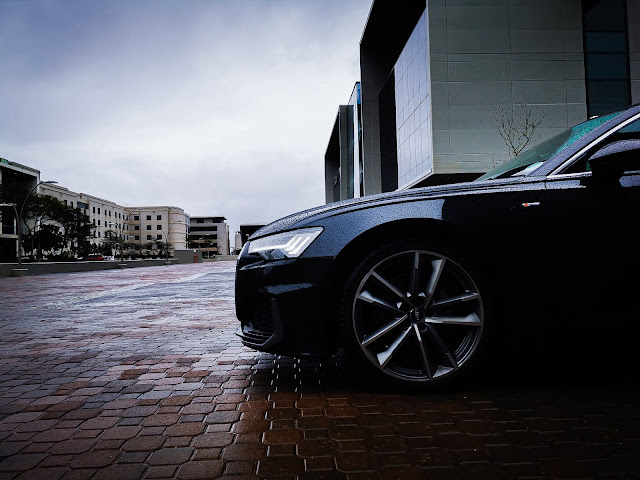 *Base price excluding extras.
Posted by Amith at 1:58 PM