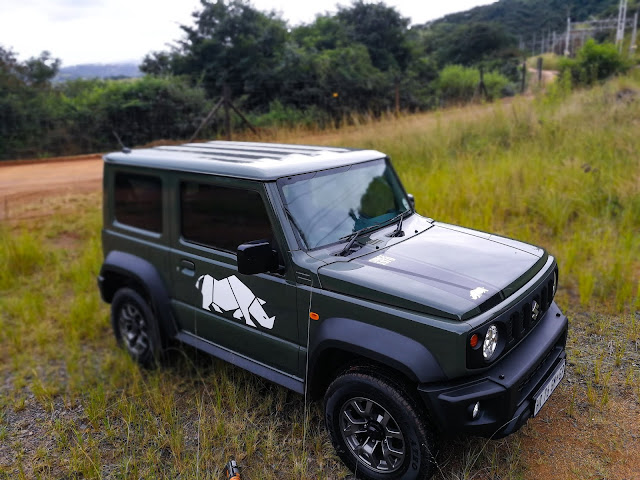 This review has been a long time coming, as I had to sit and think carefully on how I can write this review, giving the vehicle the due credit it deserves. Suzuki Jimny has drawn a lot of attention online since it first broke cover early last year, and with good reason too, it also drew a cult following from many. For long the Jimny has been one of the most admired off road vehicles, and while it wasn't greatly  appreciated it in the past by the vast majority, those who owned one only had fond stories to tell about it. So you may ask why is this new one all of a sudden the bee's knee's, even getting so much hype before anyone had even driven it? Well, the styling had a massive role to play in that, but I'll go into more detail on that in a bit, because the Jimny offer's the driver so much more in such a small package and it's great it is getting the attention it rightfully deserves. 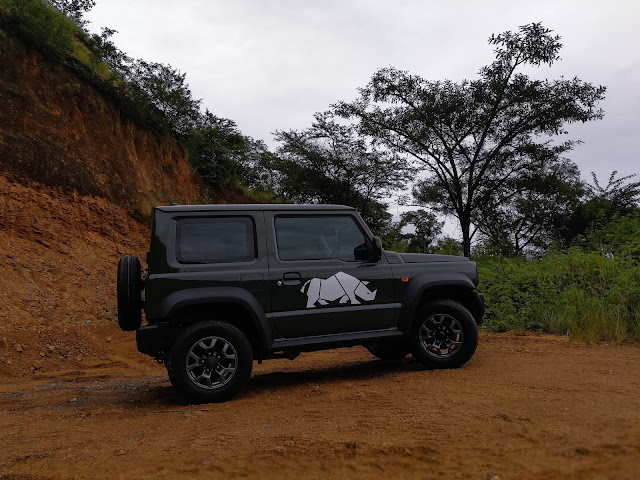 As mentioned in the into, the Jimny got the worlds attention after the first pictures of it broke through, the design was refreshing, but bared similarities to other more high end off-roaders on the market. While many would say the Jimny looks like a mini G Wagon or a hint of Land Rover Defender, one just has to consult Google to realise that the design is based on Jimny's of the past with a lot of elements coming from the model of the early 90's. There's no denying that with the edition of some after market kits like Wald and Brabus you could be rolling around in your own mini G Wagon or Defender but the stock standard off the shelf Jimny looks brilliant as well. The retro design coupled with modern twists make it a timeless design, with a a great mixture of toughened plastics and metal, flared wheel arches and and that raised ride height make it a great looking vehicle. There are add on graphics available to make your Jimny more stylish and different, as well as the great colours to choose from. On the interior, it's surprisingly spacious for such a small vehicle, lots of head room for a tall guy like me, but the width of the seats are slightly compromised, though still comfortable. While the interior is mostly made up of plastic, its the good stuff, the hard robust kind that I don't mind, especially in a car that's meant to be going over mountains than just on tar roads. 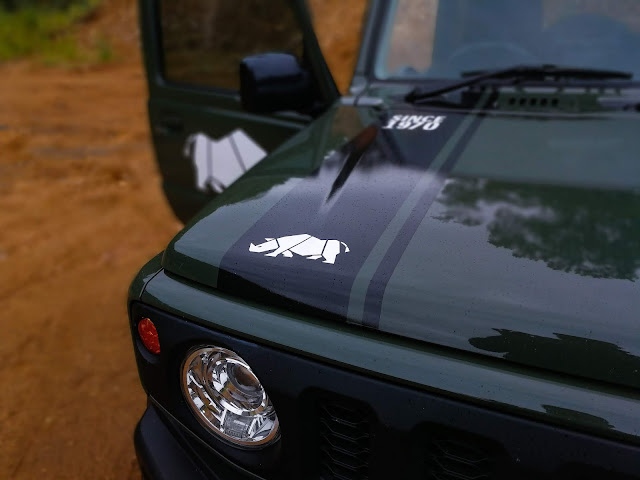 The all new 1.5L naturally aspirated engine powers the Jimny, with strong torque and wide rpm range for powerful off-road performance while still keeping on road driving pleasurable for the driver. With the manual gearbox, I felt more in control on how I wanted to drive the car on the tar versus off road, where you'll need to be in low range for most of the time, while negotiating trick obstacles. The 4 cylinder engine really surprises you, even with the low power output of 75kW and a decent torque of 130Nm, it's a feisty little bugger and will have you chasing up cars on the tar.   The one way I would like to describe it is like a Jack Russell, small but full of energy. I didn't get a chance to take the Jimny properly on the off-road course as the mother of all storms hit Durban the day I ventured out and most of the obstacles were closed but with way the Jimny is built, with its rigid ladder frame chassis and the 3-link axle suspension with coil springs, it is bound to be tonnes of fun. The four wheel drive system with the low range transfer gear works like a charm and switches over to two-wheel drive for better economy and enhanced cornering on paved roads. 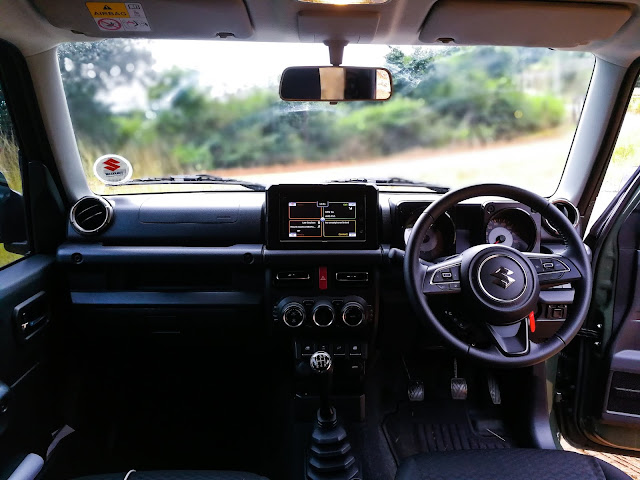 With the Jimny being built for off-roading more than on road driving, you'd expect the ride quality to be compromised but surprisingly it's not. With the comfy seats, and great suspension, the cars ride quality is quite smooth, the cabin does tend to get a bit cool with the rigid design but other than that, I found the overall comfort fact decent in a vehicle like this. There are seats for the rear passengers but with this being a coupe type design, it isnt the most spacious place to be and getting in and out the back is quite tricky if you're above average size, also luggage space gets minimised a lot if the seats are not folded down. You may be able to squeeze in a laptop bag or two. The Jimny does come with a cool tool kit box in the trunk space that has a nice lift up lid. The Jimny 's infotainment system is one that is found on most of their higher spec'd range with a touch screen display whic is easy to navigate and sync your device to, it also has a USB port for charging or USB input. It has standard aircon with automatic climate control, the whole layout for the AC and switches for the windows below are designed really retro and are very cool, adding that extra charm to the interior. 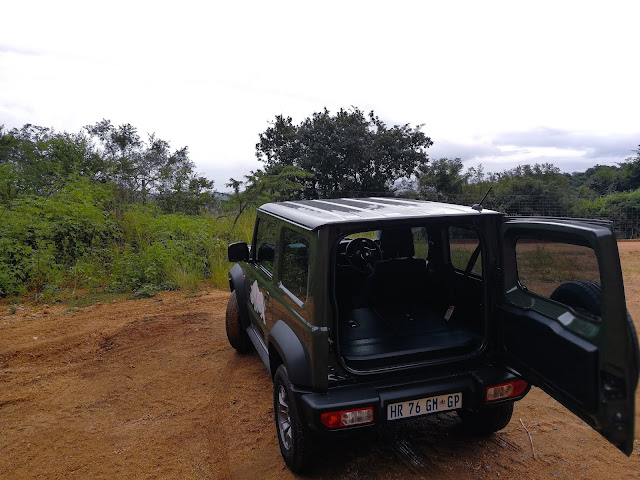 My week with the Jimny was quite an interesting one, interesting because the amount of attention I got from it was great and weird at the same time. People were coming up to me asking me about the car, as if I was driving a supercar or something. I guess with the demand of the car at the moment, there isn't many on the roads and with the noise it's been generating online, there are many keen observers who want to see if the car really lives up to the hype. Let me tell you that it does, but what people need to understand where this car slots in and what it has to offer. It's probably the most capable proper off-roading vehicle available on the market for that price. If you'd want similar types of 4x4's, you'll be paying almost double. It's an attractive looking car that handles great, both on the road and off it. The price is the really attention grabber that will give the aspiring adventure junkie a reason to opt for something like the Jimny. 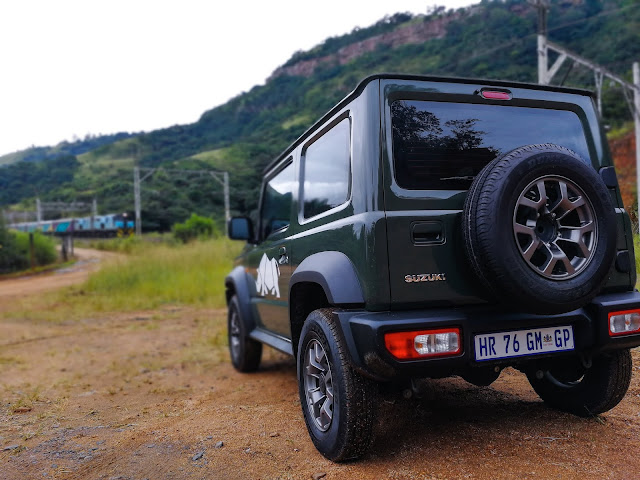