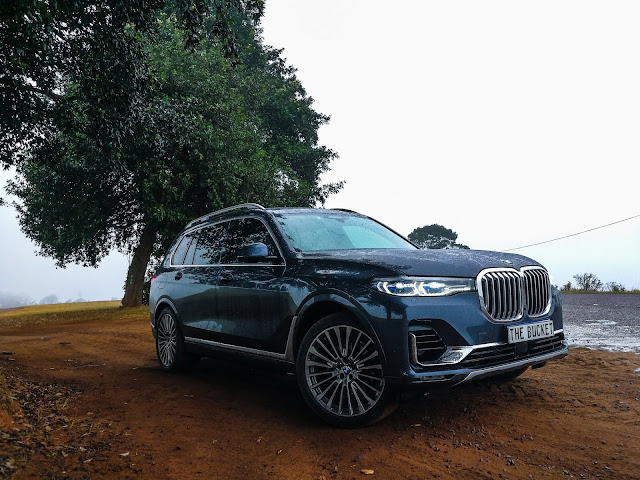 When BMW said it was making a 7 seater luxury SUV, many thought the idea of having one wouldn't fit well with the brand as it was and always has been a sports based one but over the years there has been a massive trend shift with many preferring the SUV over the sedan. Apart from practicality and space, there is just a certain appeal that SUV's have of which normal cars cannot offer so in saying this, BMW forecasted well with the X7 as there is a massive void in the market for this type of car. Currently in the luxury 7 seater segment, there is only one other rival and that is the Mercedes-Benz GLS, but with that current model being aged this puts the X7 in prime position to be the markets best offering. I got the opportunity to spend a week in the 30d xDrive Individual derivative of the X7 and while my expectations of the vehicle were high, it still managed to blow me away. 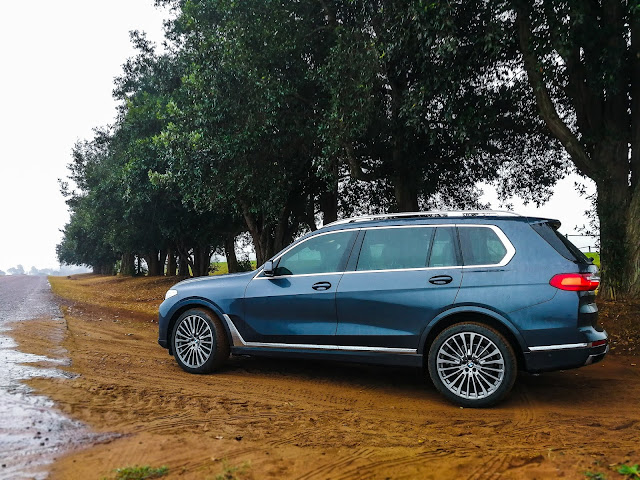 Molding a car of this size and nature to look appealing isn't an easy feat, I know as I dabbled a bit in car design back in the day. There's always going to be be angles and areas that look awkward or off but I can't really say that's the case with the X7, yes the primary shape of the vehicle is very boxy but BMW worked well in making that a key design aspect of the X7, accentuating the bold character of the car by increasing dimensions of design elements to make everything fit and work. The grille for example, when first images broke, it was a major controversial talking point about it's size. It's the biggest kidney grille on any BMW ever made and seeing that the X7 is the biggest production model from the company, it would only make sense that the grille would be big to suit? The grille is active like all new models, so it opens and closes when there's a need to allow natural air into the radiator. With the Individual package, there were a lot of elements which had silver and chrome finishes, adding to the luxury allure of the car. The multi-spoke 22" rims gave the X7 presence. The lights are very similar to that of the 7 Series sedan but adjusted to suit the cars size, fused into that massive grille and add's dimension with the LED halo's and laser inserts in the middle. The back end lines up perfectly and I like the use of the solid chrome bar which is also present on the 7 Series Sedan, a sort of aspect to make it known that they are both in the same league. 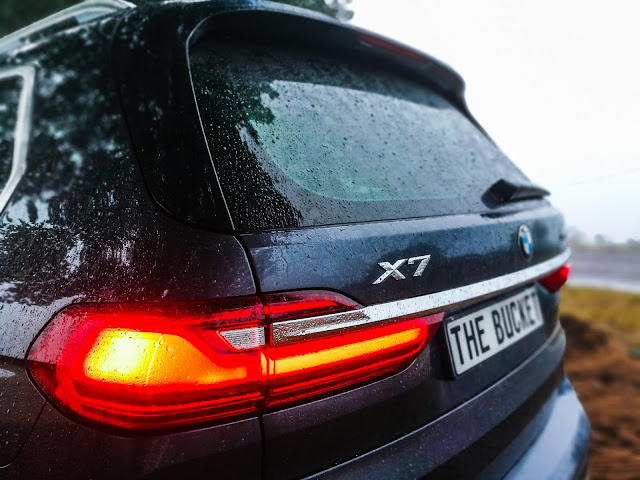 Being the smallest engine in the line up, BMW's 3 liter TwinPower Turbo Diesel engine shouldn't be looked down upon as it was more than adequate to propel this monstrous beast along its way. Technical data, the motor produces 195kW with a Max Torque level of 620Nm, the claimed fuel consumption is 7L per 100km but I managed to get 8.3L per 100km during my time with it, which is still rather impressive for a car of this size. The weight being well over 2 tonnes doesn't pose an issue to the motor as it is more than adequate to handle the burden, and if the need did arise to need extra oomph, just flick into sport and make that 620Nm of torque do it's job. On a long distance trip, it proved to be quite delightful, as the car builds up speed over a long period the revs drop ever so slightly, giving you great performance and great economy. While the X7 does have some off road capabilities, I only had a chance to do some light gravel road driving with it and it gobbled that up as if it was nothing. 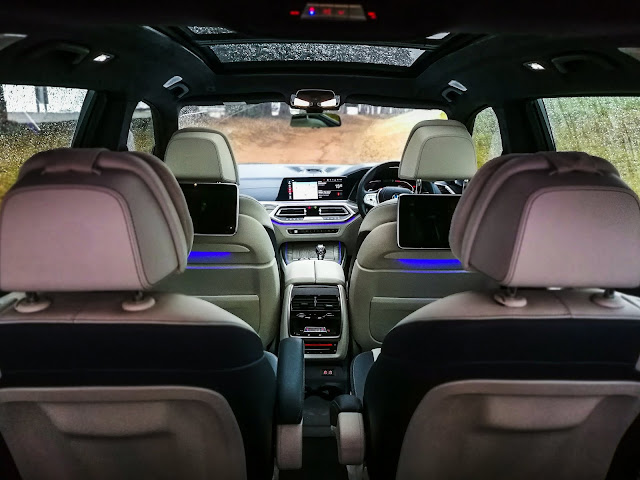 While the X7 can be fitted in a 7 seater configuration I feel many are going to opt for the one I had, which is a 6 seater configuration where the second row compromises of 2 single seats with arm rests, thus giving the passenger a proper limousine feel to the car. The Individual package spec'd had quite a few options that elevated the luxury comfort levels in the car. The front driver and passenger seats both come with dual climate control, as well as heated and cooling seats, the cup holders can also be heated or cooled, depending what drink you have in them. The second row has the dual climate control aircon as well, they also have controls to operate the blinds, roof curtain and sun roof. The 3rd row of seats also have their own climate control for the temperature right at the back of the car and they too have their own glass roof but just a curtain which controls the sunlight. The ride is exceptional, whether it be on tar road or gravel, the suspension copes well on any surface it finds it self on. 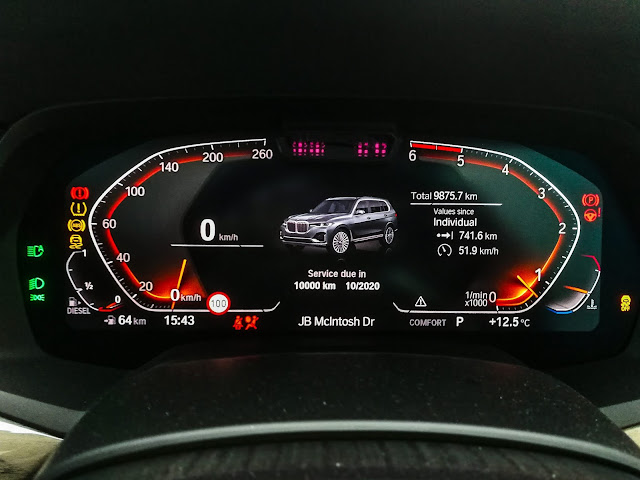 BMW is always one for gadgets and like the new 3 Series we had on test previously, the X7 comes with all of that and more. Heads up display is bigger than normal on the X7 but pretty much the same info, the display screen is also the largest that can be found in any of the BMW models. It is touch screen and has gesture controls for the driver. The X7 also comes with semi-autonomous cruise control as well as reverse park assist, this feature being very handy as it isn't always easy judging spaces with a big car like this. The entertainment package in this car came with dual screens for the second row passengers who have their own entertainment console which has a DVD player for their personal watching preference, or they could hook their mobile device up and stream onto the screen. They could do this individually or share it amongst all the screens in the car. Bare in mind the drivers screen will switch off when in motion as to not distract the driver. The 3rd row seats are electronically controlled either from the back or the boot where by just pressing a button has them folding up or down. Pick of the tech for me has to be the laser lights, as with every new model that rolls out from BMW, the lights just keep getting better and better. The adaptive technology that it's fitted with continues to impress me. 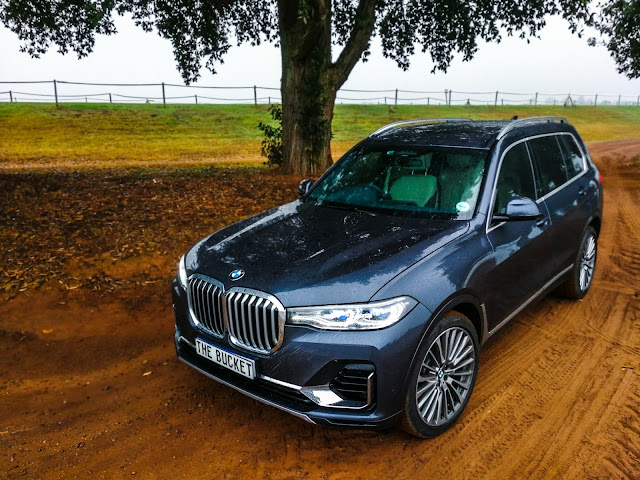 There's no beating around the bush with the X7, it's an expensive car built for people with expensive taste who need something bigger than the norm. It's a 7 Series on steroids but at the same time offers the practicality that only an SUV can give. With many wanted to see the car while I had it, it was clear that they were all equally impressed at what they saw. Pricing may be a daunting factor but in-terms of value for money, there's no denying this ticks all the boxes from what you would need to have a luxury SUV. It's presence on the road is formidable, cars move out of the way when they see you coming. Strap on a blue light to it and I could have gotten away with a lot of things. Despite it's size, the tech and driver assistants make it a breeze to park and navigate on the narrowest of roads. It really is something special that they've created here and to the right market will prove to be quite a hit. 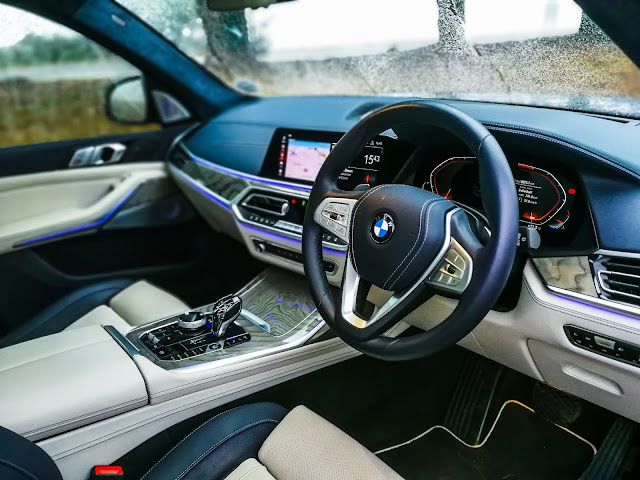