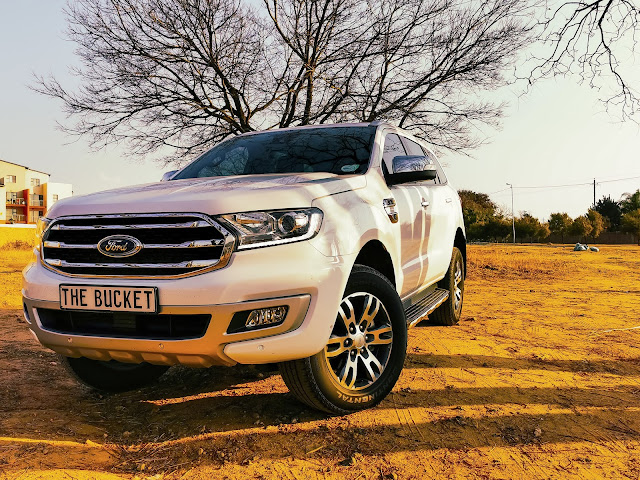 When it comes to SUV's in the SA market, the two heavyweights which battle for market dominance in-terms of sales figures, are the Toyota Fortuner and Ford Everest. While both are very similar in overall aspects, Toyota did have the upper hand with more engine variant offerings than Ford with them only having the 2.2L and 3.2L liter diesel options, but recently Ford South Africa have introduced their new 2.0L Bi-Turbo Diesel which is set to stir things up for them as the Everest is already a great offering and with this new engine variant it can only do good things for the brand. I had the opportunity to spend a week with the new Ford South Africa Everest 2.0L Bi-Turbo as well as take it on a cross country trip from the coast to Johannesburg to see how it goes, here are my thoughts on the car. 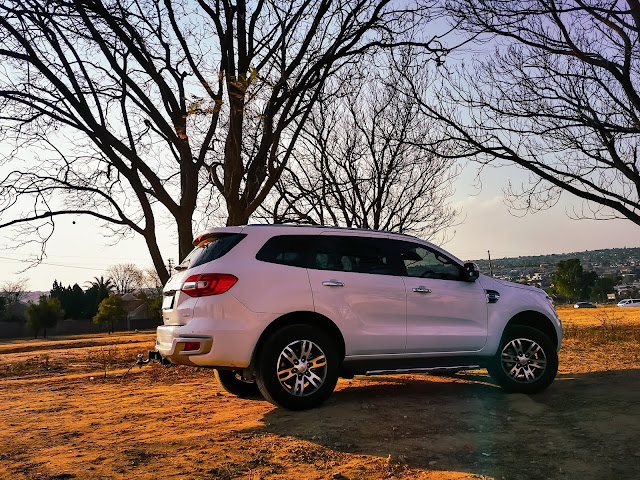 To me the Everest has always been the best looking 7-seater SUV on the market and it still remains that with this new model receiving subtle styling enhancements but the overall looking remaining very much the same. It goes with the saying, don't fix something if it ain't broke and Ford reservedly did so. The car has that American charm to it, even though it features the Ranger front end but sporting a different grille, the way the car is sculptured with added bulk on the wheel arches, flowing lines along the side to give the side profile a very professional look before tying in perfectly at the back with the longitudinal lamps. The car is very classy and even more so in this Frozen White paint work. The model specification I had was the top of the range Limited which has 18" rims, a lot of chrome accents, ventilated brake discs up front and a whole lot of safety features. The inside also remains very similar to the previous model, pretty much the same set-up as the Ranger but more softer materials to give it that family/ luxury feel rather than that of a bakkie. 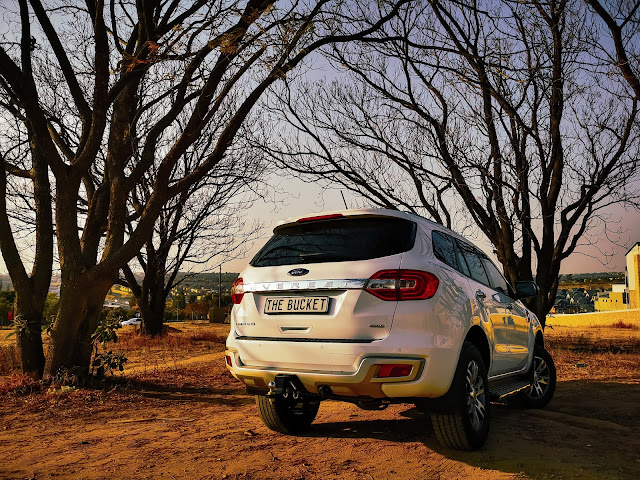 As mentioned, this is Ford's all-new 2.0L Bi-Turbo Diesel engine, it's teamed up with a new 10-speed automatic gearbox which combined with the performance from the engine make it a dream to drive. The old 6-speed automatic wasn't too bad and performed well with the 3.2L diesel engine but with the 2.2L it had it searched for that perfect medium but now with the 10-speed box it knows the ratios to produce the optimal performance when needed and it helps with the fuel economy. The 2.0L Bi-Turbo diesel engine produces 157kW with 500Nm of torque, with the Limited being all-wheel-drive, this torque is transferred to all four wheels and makes the car quite quick off the start on tar roads. Ford say the claimed fuel consumption to be 7.6L to the 100km, a figure that I didn't get close to on my long distance trip but then again with all the road-works on the N3 it would have been difficult to achieve this but still, keeping that figure to under 10L per 100km in a big vehicle like this, with a full load was pretty pretty impressive. 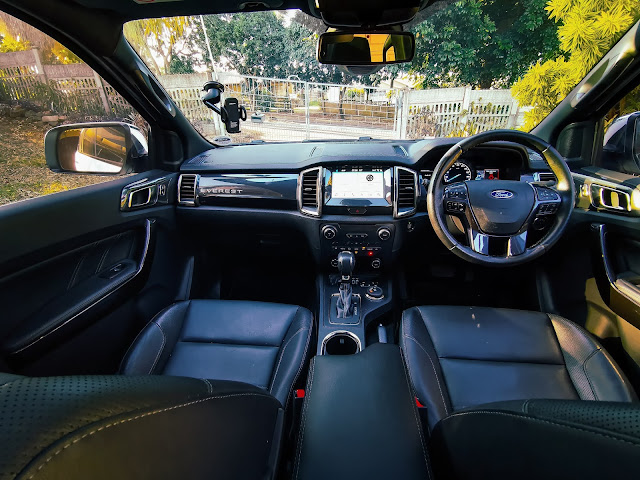 So with this being the Limited model, it comes kitted out with all the nice stuff, leather seats for ALL 7 seats, my favourite party trick from this model is the automatic folding third row seating which you can control from the luggage compartment. The third row folds flat to give you even more luggage space if required. Upfront you have seat heating for driver and front passenger, the large infotainment screen with Ford's SYNC 3, this model did not have Apple Car Play or Android Auto preloaded as per  normal but there is an option for you to do that via Wi-Fi, yes you can make a Wi-Fi hotspot via the car for the entire cabin which is also pretty cool. The second row seats is as luxurious if not more than the front, they get their own zone climate control with controls at the back. Being a big vehicle you're going to need some assistance getting around so it comes with front and rear PDC's as well as a rear view parking camera. The cruise control took me a while to figure out, but once it was activated it was smooth sailing from there as it has active cruise control which slows down if it sensors the car in front of you slowing down. It has blind spot monitoring and lane departure warning as well should you stray across and not notice, which is easy to do in a big car like this. 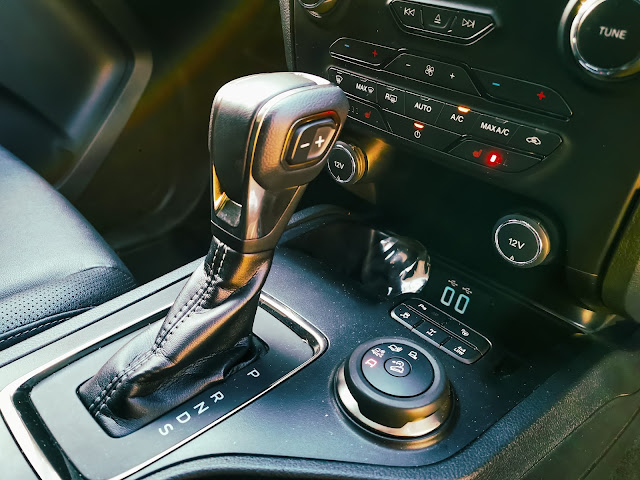 Being a fully fledged off-roader, I was hoping to take it out off the beaten track but unfortunately didn't get the time to do so but you'll be pleased to know it comes with all the bells and whistles for this application.  From Hill Descent Control, Hill Launch Assist, Roll-Over Mitigation, EBD and ESP. The jog shuttle dial system for selection of road conditions make it easy for anyone to use. The front suspension is independent with coil spring and anti roll bar, while the rear being coil spring with Watt Links. The transmission is 4WD with electronic locking rear differential, with final drive 3.31. 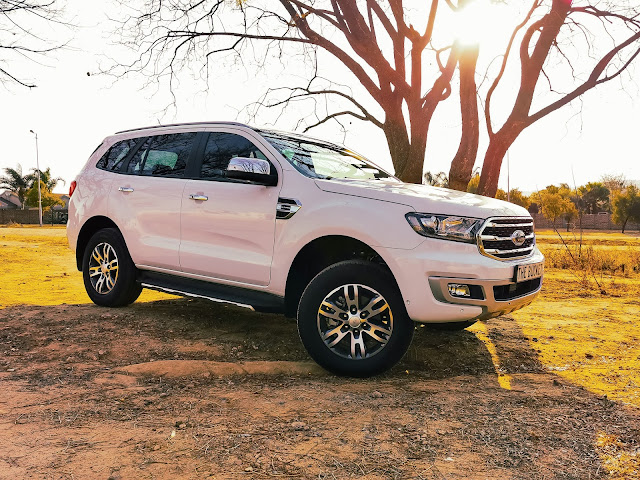 Overall this new offering from Ford which becomes the range topping model did no wrong while I had it. It's honestly still one of the best 7-seater SUV offerings on the market and while it does have stiff competition, there will be key differences which the Ford has that will win it over from the opposition. It offers a great ride, fantastic build quality and the equipment that comes as standard is great. While being a sizable car, it doesn't take you very long to get used to the size of the car when driving it around. The cabin is spacious and with the panoramic sunroof, it just gives you that illusion of it being much bigger.